ZIPLINING to Confront My Fear of Heights…COSTA RICA! Pura Vida!!!

MY NEXT FAVORITE ADVENTURE IN COSTA RICA WAS ZIPLINING! I have always been afraid of heights and have tried to confront it by SKYDIVING, PARAGLIDING, now I’m ZIPLINING! Not sure if I need to do it again after I watched a drama on ABC that showed a man whose arm got caught in the line and they had to cut his flesh off to release him.

It seemed like a great idea at first. In fact I was feeling really confident as they had us do a practice line that was maybe about 20 feet off the ground at highest. I told myself “Yeah! I can do this. This is going to be awesome!” 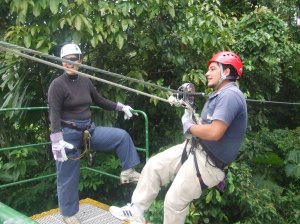 Eeeeeeeeks then it started to get real. By the time we finished the little baby practice line and agreed to move forward that was it! There was no way of getting back except to get through these 7 lines which were nothing at all like the practice line! OMG!!! My head started to burn and my heart was racing and so of course I told Shelley to go ahead first. 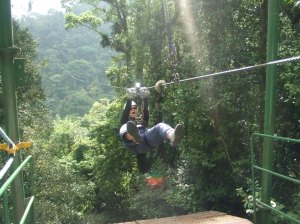 I have to mention, we ended up with a group of young college gals who were really hung over. They were a blast. Shelley is fearless and was screaming at the top of her lungs throughout the entire ride. We were all laughing so hard hearing her WOOOOOOOHOOOOO-ing from a mile away, it at least helped to calm my nerves a bit.

The views from above was breathtaking!

Looking back as scared as I was through the entire time, I’m so glad I did it. Am I still afraid of heights! Maybe even more than ever before, but it was a once in a lifetime experience I will never forget!

One thought on “ZIPLINING to Confront My Fear of Heights…COSTA RICA! Pura Vida!!!”