In looking through my cooking photos, I realized how many Shrimp dishes I’ve been making. It’s my safe, “Go-to” dish. Not without a few FAILS to say the least. When I think of the times my friends or family had to eat my Shrimp dishes that didn’t come out so great. I appreciate them not complaining and even pretending it was tasty to make me feel better. Shrimp Scampi, Pad Thai Shrimp, Shrimp Fajitas…I’ve tried to experiment that’s for sure. A couple things I’ve learned is always use the BIG shrimps. (15 count per lb. at least) Costco is where I like to get my shrimp. Leaving the shell on when cooking also keeps it much more tender and flavorful. In my efforts to eat healthier in the new year, I will try experimenting with adding more veggies to Shrimp dishes and topping salads with this delicious tasty little creature. I will be visiting Vietnam in a couple of months so I hope to learn some Vietnamese Cuisine using Shrimp too!

Finally… my last Shrimp Pasta of 2012. Another Potluck and this time it was with my calabash aunty and cousins who I haven’t seen for over 30 years. We had recently reconnected so we decided to have a holiday get together. Since everyone was making all kinds of other dishes, this is what I ended up making again… I learned I’m a creature of habit and like to play it safe. I did add tomato sauce on the pasta just to mix it up a bit. LOL. 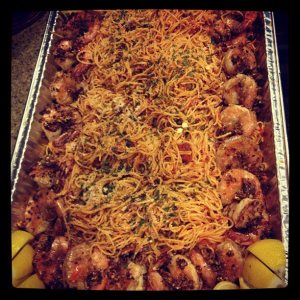 This past Christmas I got invited to my friend’s family Christmas Eve party. It was a very last minute invite so I panicked and of course had to play it safe and made the same dish AGAIN! It was a hit and in fact my friend’s nephew insisted he wanted to take home all the leftovers for his lunch the next day. That made my night. = ) 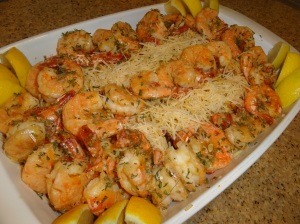 I had to make another potluck dish and I think it was for my nephew’s birthday dinner. I decided to play it safe and again did Garlic Shrimp Pasta and this time used 70 cloves of garlic. NO joke! I actually counted them. It’s a good thing I bought them pre-peeled from the Korean supermarket.

I was pretty confident with the new Shrimp and Mushroom pasta, I decided to cook this for my neighbor for her birthday. I added some spinach and parmesan cheese this time. She loved it so I was happy that my practice was paying off.

After taking my friend Shelley to a Mushroom Cooking Class at the Kahala Hotel by Executive Chef Wayne Hirabayashi, I was yet again inspired to make another Shrimp Pasta but added 3 different kinds of mushrooms and capers and parmesan cheese. It’s definitely improving.

Another FAIL at Shrimp Pasta. I took a trip to Korea with my mother to reunite with family I hadn’t seen for over 35 years and some I was meeting for the first time. I tried making Pasta with Shrimp as well as Spaghetti Bolognaise. I forgot to add the sliced Asparagus into the Shrimp Pasta. Again, it came out just okay.. nothing to repeat making. = ( They will be visiting Hawaii in a few weeks and I’m planning to have a dinner party for them. This will definitely NOT be on the menu or any menu for that matter.

I decided to have a Cuban/Mexican themed Christmas party in 2011 so of course I had to make a Mexican style Shrimp flavored dish. I cheated and used the Packet of Fajita seasoning mix and sauteed…kept it simple.

Another attempt to improve my Garlic Shrimp and Capers. This time for a Mother’s day Potluck.

This was another Thai/Asian influenced Shrimp dish I made up. My dear friend Karen gave me these delicious Green Eggplant so I  sauteed garlic and juliene sliced onion with the shrimp, then put aside, then sauteed eggplant in soy sauce, oyster sauce, fish sauce, chili sauce, little brown sugar, sesame oil, rice wine vinegar, fresh thai chili peppers,  then threw the shrimp back in and tossed again..then topped with green onion and sesame seed. 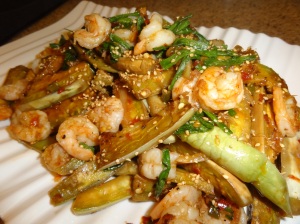 After taking a cooking class in Thailand I was inspired to make yet another Shrimp dish. Pad Thai Noodles with Shrimp. Although I made this a couple of times, I have to say it still doesn’t quite taste like the restaurants. I need more practice. 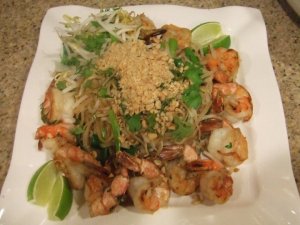 This was my next Mahalo dinner for John and Terri along with a few other friends for helping me with my move into my new place back in March of 2011. Simple Pasta with Capers and Parmesan, Filet Mignon with Garlic Butter and of course… Garlic Shrimp (which I felt was not browned enough this time… another FAIL!) My guests ate everything up and didn’t complain at all about any of the imperfections. I guess when you have lots of good wine, anything can be over-looked. 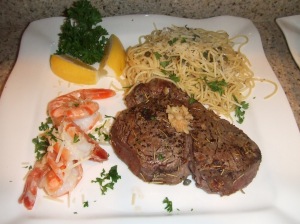 My friends John and Terri were kind enough to help me with some interior design work for my home so I cooked them a simple dinner as a thank you. Angel Hair Pasta with Tomato Basil Sauce, Sauteed Mushrooms and Spinach, and Garlic Shrimp…

I made this “Failed” Shrimp Scampi as one of my dishes for a dinner party for my college roommate who was visiting Hawaii and I obviously had the heat on too high and the garlic got a little to toasty = (. 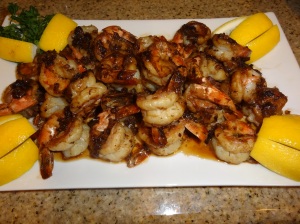 Overall the dinner came out okay. I felt my Prime Rib was a bit overdone, Mushroom and Parmesan Pasta was okay and Asparagus, Artichoke Heart and Edamame Salad was fine along with Salami and Bread, the guests were full and content.